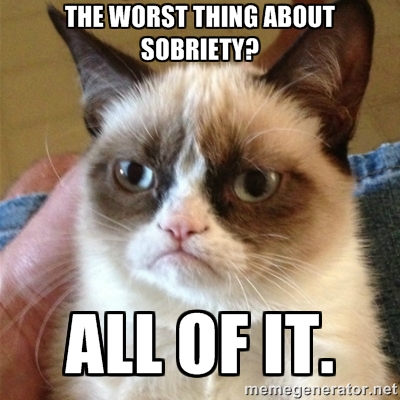 Do you hate sobriety, resent recovery, and loathe the fact that you're free from drink and drugs? Here are some common grumbles and stumbling blocks of people new to sobriety and recovery, and five ways to see it all a bit differently.

1. Thinking Your Life Is Over Because You Can't Get Wasted Now

What on earth shall I do now that I can't poison myself? It sounds funny, but that's what you're essentially saying if you are worrying that you can't drink or take drugs any more. But look at the truth of it - it's not called "getting wasted" for no reason. When you submerge yourself in substances and do nothing else, you're actually wasting your life.

The truth is, there is so much you can do when your life is no longer controlled by substances. You can develop your interests, discover yourself, perhaps even find your life's purpose. You're finally free from things that drain your energy and cloud your mind. What's a few nights out (which probably ended in carnage anyway) compared to a potential lifetime of fulfilment and happiness?

2. Wondering If It's Time To Drink Again Yet

OK, so you went a bit crazy on the substances. Maybe it was self-medicating, partying too hard, or trying to deal with some difficult emotions. Maybe you'll just take a month off, cut down on the drugs, or perhaps stop drinking for a year. After that, you should be able to handle it, right? It's only been five days and you're already wondering if it's worth it.

Stop right there! Before you decide that a little break will cure you of all your substance-related issues, take a look at some literature on addiction. Some people can hit the substances too hard and later normalise their use. But some people can't and will never be able to - they're just made differently. If you have family members who are addicts, if you can't ever stop a drinking session after one drink, or if you feel empty without substances, these are warning signs that a break will not "fix" you. Time to consider that a longer-term solution might be abstinence. It might be the only solution that works.

Once you've got over the initial difficulty of feeling newly sober, you'll see what a rewarding life path it is. It's so much better than suffering from constant cravings and having to "watch" yourself so you don't go overboard again (and then having to apologise to everyone you offended when you inevitably do).

3. Resenting People Who Can Drink And Drug "Safely"

So your friends can drink without the consequences that you seem to attract. None of them end up in strange people's beds or police cells after what was supposed to be a quiet drink. They always seem to be able to stick to a limit, rather than needing more and more substances to feel satisfied.

There is no point resenting the fact that friends can seem to indulge with impunity - it's not that they have more willpower or know how to behave themselves. Your biology is different to theirs. You are an apple - they are an orange. It's much easier on you to accept this and live accordingly than it is to battle against your biology, wishing it were different.

In any case, health experts say that many people aren't drinking or drugging safely these days. In the UK at least, liver disease is the only major cause of death still increasing year-on-year, with a 40 per cent increase in cases over the past decade. Sobering fact: this is not just due to "alcoholics" - this includes people who are sociable drinkers, but would not be considered addicts. It seems even more "normal drinkers" are causing themselves serous health issues. Think about that the next time you feel bitter about ordering a diet coke.

4. Not Being Grateful For Sobriety

In the early days of recovery, sobriety can seem like a real pain in the rear end. You have to relearn to do everything sober that you once did drunk, and it feels kinda awkward and strange. You may feel resentful about it, and hate your new way of life. You may start cursing the world and your screwy dopamine system. You may feel like you've been given a raw deal. You may even be somewhat petrified, finally feeling your feelings and not having that familiar mask any more.

Forget, for a moment, the small stuff and remember the bigger stuff. Without sobriety you could well be dead, in prison, or have lost everyone and everything you ever cared about. That's the reality of addiction when it reaches the end of the line. It's not just about being grateful for sobriety, but the fact that you now have a very good chance of avoiding all those terrible things.

If you do have issues with awkwardness, fear, anxieties, and painful emotions coming to the fore, this is finally the chance to deal with them - for good. Sobriety gives you the chance to finally resolve all those lifelong issues and free yourself, rather than remaining a slave to addiction and the past for the rest of your life. That freedom is worth the initial slog - be grateful for it.

5. Thinking Sobriety Is About "Quitting"

Argh! I have to give up everything - like a complete loser! No, no, no. Getting clean and sober is really not about quitting anything. It's about replacing alcohol and drugs with better ways of thinking, being, and dealing with life. Recovery is about taking action instead of hiding. It's about being willing to learn and do things differently from now on.

You don't lose anything when you put down the drink and the drugs - you gain things you never imagined you would; priceless things like self-esteem, self-respect and peace of mind. People in recovery aren't quitters - they are people who choose to be free.

by Beth Burgess, Addictions Therapist and author of The Recovery Formula and The Happy Addict.