Depression is a tricky mental health problem. There are a few different manifestations of the illness, ranging from situational to chemical. If you've got negative thinking and low emotions going on, there are things you can do to change that, whereas feeling completely flat or “doom-filled” out of the blue may require specialist help or medication.

But the mind and body are connected, so even if you do have some sort of chemical basis for being depressed, you can still make changes which wil 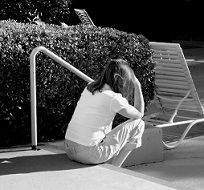 l support you to come through it, if not solve it completely.

Let me tell you a little of my own story. From my teenage years onwards, I used to be found regularly sliding down the wall, crying. I tried to commit suicide no less than seven times. It's not surprising really, given what was going on in my deeply depressive mind.

Quite frankly, my mind was like a Lars von Trier film, only less Danish. It was a breeding-ground for feeling bad. The images, the thoughts and the self-talk that nested in my brain would have been enough to send anyone over the edge.

It was like a self-fulfilling prophecy – the more I felt sad about being misunderstood, the more deeply I entrenched myself in my misunderstoodness. Because if you couldn't be bothered to understand, world, then I would have to test you even more and punish you with my bad feelings.

So, I replaced pessimism with positivity, grievances with gratitude, aversion with acceptance and self-pity with striving to make my life better. And I became a happier person with a he

You may well be saying to yourself “But Beth, I can't just change. My mind isn't like that.” No, it isn't. Neither was mine; I had to train it. The truth is that you'll never get out of depressive thinking without some concerted effort. Effort is a difficult thing to do when you're depressed, so you have to be really committed to overcoming it, little by little.

I'm not suggesting that if you're feeling miserable you throw a massive party or visit the circus – you can start quite gently. If you must have a duvet day, why not list a few things you're grateful for while snuggling under your duvet. If you're having a hard time of things, show yourself compassion by offering yourself some encouraging words rather than beating yourself up.

When you're feeling depressed, instead of putting on some Leonard Cohen so he can commiserate with you, why not look at what you can do to change your mood rather than encouraging it to deepen with the music.

Breaking the pattern of negative thinking and behaviours can be done bit by bit, replacing old automatic negative patterns with more helpful new ones. And the more you do it, the easier it gets as you build new neural pathways in your brain to help you feel happier and happier from now on.

Whether your problem is your thinking, your situation or your chemicals, giving a helping hand to your brain can only be useful. Start with self-compassion. What little constructive thing can you do to help yourself feel better?

If you're really struggling, consult a doctor, a therapist or a mental health professional for more help.